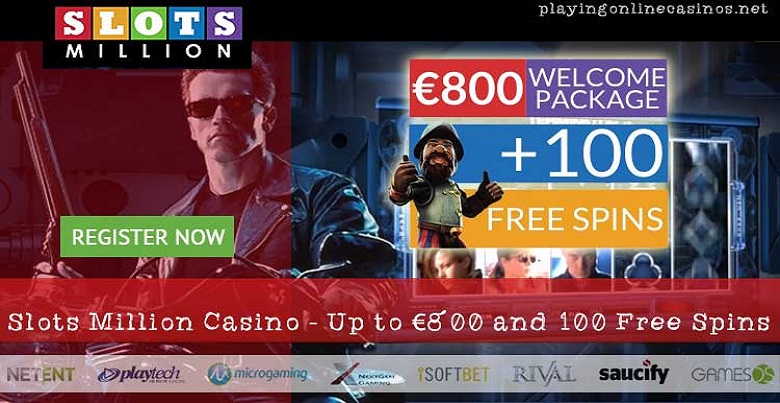 Slots Million Casino has finally launched and in a big way. They opened their services to online casino players around the world and brought a record setting 809 slot machines to entertain them with.

Having a large array of the industry leading software suppliers such as NetEnt, Microgaming, Playtech, Cryptologic, NextGen amongst others has allowed Slots Million to support such an extensive catalogue of slot machine games.

The games list will only grow with some of the latest additions being NetEnt’s Steam Tower, Tornado: Farm Escape and Spinata Grande. This game allowed players to win a fully paid holiday to Mexico as part of the launch promotion.

Their portfolio also contains all of the all-time classics such as Gonzo’s Quest, Twin Spin and more.

Their mobile version also boasts an impressive list with over 200 slot machine games alone. They also say that once the addition of all table games is complete their total list of games will be well over 1000 with the mobile version boasting 250.

Their progressive jackpot games will be making players millionaires in no time. There are 37 jackpot machines that include the famous ones like Mega Moolah, Treasure Nile, The Dark Knight, Cosmic Fortune and Treasure Nile amongst others. So if you are looking to score a million or more, this casino room is for you.

Their user interface is also genius in the way it makes it simple for players to go and pick from the hundreds of titles they have on offer. The search function works great and you can add your own filters to narrow down the games for which you are looking to play.

As of now the regions covered by this casino is Scandinavia, more in detail being Finland, Norway, Sweden and they offer English language as well for other areas.

Expect this casino to grow vastly in the next coming months as such a juggernaut of games has not hit the market in a long time.